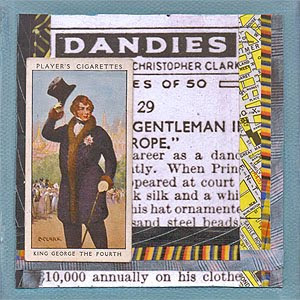 In the old days, if you did not have enough reasons to smoke, some cigarette packs came with little trading cards. They were in collectible series on a variety of historical and manly topics. I have seen cigarette cards on subjects ranging from automobiles and steam engines, Peoples of the British Empire, Cricket Players, etc. One of the oddest series had to be the cards depicting famous dandies.

George IV was one of the most famous and fabulous dandies of all time. According to the details on the back of the card he spent over £10,000 annually on his wardrobe, he even appeared in court in “a coat of pink silk and a white silk waistcoast.” George IV wracked up huge debts, a horrid arranged marriage and died obese and possibly addicted to laudanum. Somehow I imagine it would be like having a 19th Century Merv Griffin as your monarch.

Dandy is a term and a type that is disappearing in our culture. Make no mistake, the metrosexual is far from being a dandy. That was just a brief fad that the cosmetics industry foisted on a bunch of dupes. And, any bad moustache in a v-neck t-shirt and tight jeans who thinks of themselves as a dandy, is only fooling himself. Being a poser is for amateurs. A dandy requires a level of commitment that few young gentlemen seem to be up to today. Considering the staggering student loan debt and lack of jobs for college graduates, it might be better if we encouraged more lads to choose a “career” as dandies.