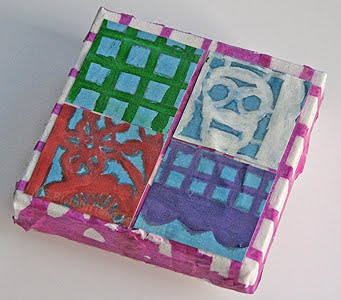 When I moved to San Francisco I discovered Paper Picado the Mexican paper-based folk art. Traditionally it is not cut, Papel Picado is chiseled. Huge, tightly layered sheets of colored tissue paper are packed into a block. The patterns are then cut into the block of paper using a chisel. I am yet to try this, and imagine it’s much harder than it looks. I suspect the novice could chisel his hand as easily as the block of paper. The advantage of the chiseling process is it allows one to make hundreds of sheets at once. That they are on tissue paper adds to their ephemeral nature.

Papel Picado was brought north with immigrants from Mexico. It has become as much a Californian Folk Art as it is a Mexican one. Its patterns appear in other forms and have fused with other traditions. I even saw some Chanukah Papel Picado recently. The railings of the BART station at 16th and Mission are designed to resemble Papel Picado.

Papel Picado has taken a long journey, starting with cut paper art in China about 2,000 years ago. It spread west and found its way to Spain with the Moors and subsequently the Spanish brought it to Mexico. This link has a good article from the International Folk Art Museum in Santa Fe.