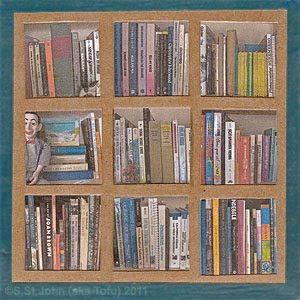 If I am visiting someone’s home, I often like to get a look at the bookshelves. If you really want to get to know a person, their bookshelves are a great place to begin. There are some people who are heavy library users or they just don’t hang on to books. And then, there are those who, it’s hard to imagine, don’t read. You can learn a good deal about what I am interested in, where I have been and where I like to go by perusing my bookshelves. But I too am a big fan of the library, so it’s not a complete story.

I have always lived surrounded by a lot of books. I grew up in a Victorian house that my parents particularly chose for its large wall of built-in bookcases. Every home has always had walls and sometimes piles of books. As a kid I can remember the occasional visitor who would always look at the wall of books and say something inane like, “Has someone read all these books?” A question like that always tells you who you’re dealing with.

(I figure I am hurting no one’s feeling by this point, because people who don’t read books would have never made it past the first paragraph).

All of the images for today’s piece for the 2011 Project came from my own bookshelves. My work often is oriented in grids so constructing the images this way is expected. About 10 years ago the SFMoMA did a Sol Lewitt retrospective. My favorite part of the show was his series of very personal, autobiographical photos. He had photographed every day objects in his home and studio and laid out the square photos in 3x3 grids. The series included things like what was on the kitchen windowsill.

Sol Lewitt’s series reminds us that, as an artist, the best way to construct an autobiography may not be the written word. Last week I had some friends over to see the 2011 Project “in progress.” They got see the 140+ pieces on the wall in a big grid. As we were deconstructing and discussing the work it became clear that even though I am creating a map of the year, the work in itself is also an autobiography. It reflects the present as well as the life so far that has lead up to this point. This is especially manifested in the way I am using bits and pieces of things I have been saving for decades.

So, to get to know me, start with the bookshelves.

And always remember the words of John Waters —

“If you go home with somebody, and they don’t have books, don’t fuck ‘em!”