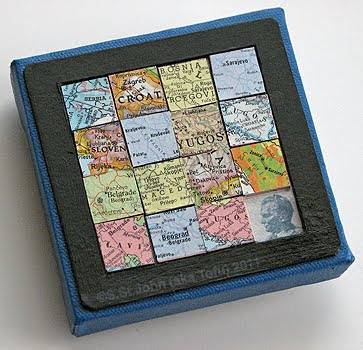 My artwork is often focused on using old maps. I have always been interested in historical geography and even if I wasn’t, I would learn it anyway as I cut up and repurpose old maps. One place in particular that has seen a great deal of change is Yugoslavia and the nations that now make up the former country.

Today happens to be Tito’s birthday. It may never be appropriate to refer to a leader as a “good” dictator, but all dictators are not the same. Tito certainly was not a bad dictator. After leading Yugoslavia’s WWII resistance to the Germans he lead Yugoslavia for 35 years. He steered a separate, independent course for Yugoslavia as the country slipped under the Iron Curtain. Perhaps Tito’s greatest accomplishment was holding the country together and creating a state of unity between its different ethnic and religious affiliations. A lot has changed in Yugoslavia since his death in 1980. Without Tito the country fractured apart and slid into a gruesome civil war.

It’s unlikely that Yugoslavia will ever exist again except for on old maps. I still have plenty of pieces of Yugoslavia to incorporate into my art. Today’s piece for the 2011 Project is a slide puzzle. Slide puzzles are one of those pre-electronic toys that have all but vanished. If Tito were here, he might be able to put it back together.