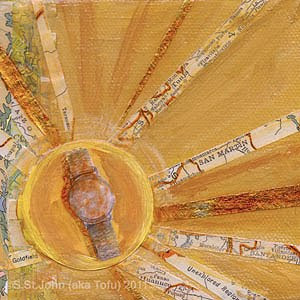 Here it is, the first one. Even though I do not intend to install the finished pieces in any particular order, the first one seems weighted. It needs to be extra special, making coming up with an idea for this one even more challenging.
New Year’s Eve and the entire New Year’s weekend were gloomy, cold and gray in San Francisco. At 4:45 pm on New Year’s Eve I was working at my desk. I suddenly noticed the change of color in the light well in front of me. The light was a golden glow. I looked towards the front of the apartment and could see the entire street was glowing. I looked out in the direction of Ocean Beach and saw the entire City bathed in a golden light. This lasted all of ten minutes.

In years past have spent the sunset on New Year’s Eve at Ocean Beach. There a small group of locals participate in the Afro-Brazilian ritual for the Goddess Yemanja. The ten minutes of light made me long to be out at the beach. Even though I didn’t make it out there, the entire City and the coming year now feel blessed.

So, the color for 2011 is gold. It shall be a Golden Year. As I worked on the first piece on New Year’s Day I wanted to include a reflection of time. The image is of an old, gold watch given to me by my Uncle Walter. He would be 100 if he were still with us. I had gone over halfway through the first day of the year without listening to Yma Sumac. Her five octave voice filled the room as I added pieces of a map of Peru to finish the piece.
Posted by Tofu at 11:43 AM