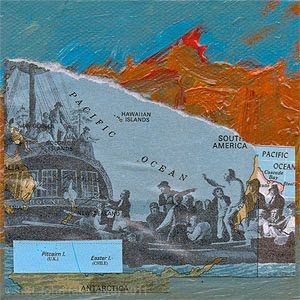 Feeling mutinous? Today is Bounty Day on Pitcairn. It is the anniversary of the burning of the H.M.S. Bounty in 1790. On Pitcairn the descendants of the H.M.S. Bounty mutineers still celebrate by burning replicas of the ship. They also celebrate on Norfolk Island, but not until June 8. June 8 is the anniversary of the day when many of the descendants relocated to Norfolk Island due to overcrowding on Pitcairn.

Holiday traditions with burnings and/or bonfires abound throughout human culture. And, if you think driving to Nevada to go to Burning Man is a journey, well try Bounty Day. It’s not easy to get there. The remoteness makes me want to visit the place.
Posted by Tofu at 4:05 PM