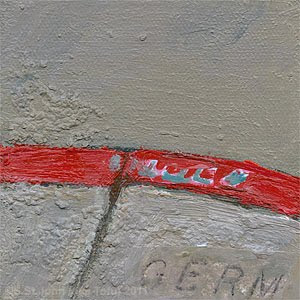 I finally saw the documentary Exit Through the Gift Shop. The title lead me to assume it was an indictment of the commercialization of museums and their big spectacle shows. Just last weekend I even saw the DVD for sale in the SFMoMA’s gift shop. It’s a great title, but, if you’ve seen the film, you know it really doesn’t fit.

I have a little patience for long documentaries. 30 Minutes would have probably covered it. This one is rather disjointed. The beginning is a mix of fairly interesting footage of street artists. The footage was taken by Los Angeles-based filmmaker/artist Thierry Guetta. The last hour of the film becomes a documentary about Guetta and his work. Let’s just say, France has exported a new P.T. Barnum to the United States.

For the past six months I have been repeatedly asked if I’d seen Exit Through the Gift Shop? My friends all knew I would have something to say about it. Honestly, that’s about it. But it did get me thinking again about the nature of street art.

Last summer Banksy was in town. It was amazing how much of a buzz his visit created. Sighting his work was the thing to do in July 2010. Some of my fellow citizens acted as if we were blessed by a royal visit. Should we really feel so honored? Or was Banksy like a waning pop star in the 1980’s who had to start touring Japan. Or worse yet, was San Francisco on the state fair circuit in terms of the international art scene. I realize I am bordering on blasphemy, if I question the cultural significance of the City I do love.

My neighborhood, The Lower Haight, could be called one of the centers of street art in San Francisco. A city where a good deal of interesting street art is created and displayed. For all the good stuff I see out there, I often sense this blind, unquestioning love of street art that borders on fanaticism. There are some who seem to profess that if art is plastered to a building or stenciled on the sidewalk, that it must be good. Some of the biggest champions of street art will totally reject any artwork in a gallery or museum. How can you legitimize art solely because it is on the street yet reject art solely because it hangs in a gallery?

Part of the appeal of street art is the relative ease of showing it to the world. There are no curators acting as gatekeepers to the art world in the streets. Street art has given the public access to a lot good art that may never been seen otherwise. But, it also has resulted in a lot of crap around the neighborhood. I realize that art appreciation is inherently subjective and then we could step into the debate of where we draw the line between tagging an art.

Street art is to art as blogging is to journalism. There are a lot of good blogs and some are better than newspapers. With both street art and blogs, there are no gatekeepers. Anyone can do it. We have to remember, just because anyone can do it, it does not make it legitimate.

The street often adds a legitimatizing context to bad art in the same way that a posh gallery can show terrible photos. The sort of bad blurry, photos that have been blown up, framed and attached to a price list.
Posted by Tofu at 12:04 PM