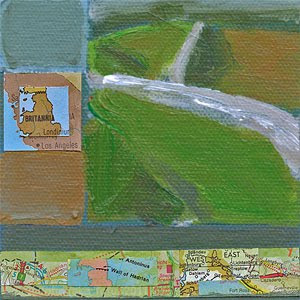 I have a lifelong fascination with borders. Particularly changing ones. From an early age, I’ve spent hours pouring over those maps that show the expansion and decline of empires. History, when illustrated in maps, is a very simple reminder of how impermanent nation states can be. I have a pile of atlases I use for collages. They are filled with Berlin Walls and Soviet Unions.

Hadrian’s Wall is one of those places I’ve wanted to visit. I am fascinated by the idea of it once being the outer limit of a vast empire. Today it is a rather unassuming stone wall running through the countryside. Hedeby is another place like that. It was the largest Viking city at one time. Where a city was, I found a cow pasture in Germany near the Danish border. The fact that such a significant place of Viking history is no longer within the borders of Scandinavia reinforces the idea that no border is permanent.

We have our own Hadrian’s Wall in Northern California. There is a relatively unknown historic park near Bodega Bay called Fort Ross. When I first heard about it, I was immediately drawn to the spot and got up there soon afterwards. Fort Ross is a re-creation of the original Russian fort and fur trading outpost. Southernmost Alaska if you will. It is literally the spot where the far flung empires of Imperial Russia and Spain once met. It takes some imagination on a quiet spot along the California Coast to believe that two European empires once stretched so far to meet there, if even tenuously.
Posted by Tofu at 6:00 PM