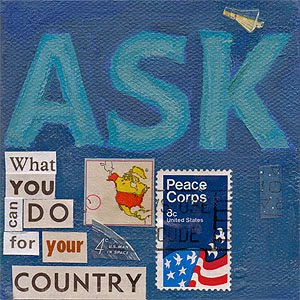 I found an old Peace Corps postage stamp the other day as I was perusing one of my collage fodder boxes. It got me thinking and I realized that we were coming up on a big anniversary. It was 50 years ago today that President Kennedy gave his inauguration address where he said, “ Ask not what your country can do for you - ask what you can do for your country.”

The Peace Corps was one of the greatest achievements of Kennedy’s brief presidency. This week also saw the passing of the first director, Sargent Shriver. Reading his obituary reminded me how times have really change. Shriver was from an era when more of our political leaders were focused on the common good. Sadly, today many of the loudest politicians seem motivated out of desire to create an atmosphere of adversity.

Perhaps it’s time for another question. How will treating government as an adversary make our society better? I don’t think there is a good answer to that one.