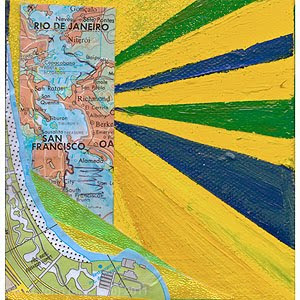 When we think of the Yellow Peril, the first thing that comes to mind is racist attacks on Asian immigrants a century ago. Well, it seems the good people of Marin are once again facing a yellow peril. Or so they would have us believe.

Last night I saw a piece on the news, and it has also made the papers. People in San Rafael are having a fit over the paint job on a pizza place. Pizza Orgasmica has opened up in San Rafael and painted the façade of the building bright yellow. The business owners are originally from Brazil, and like many Americans, enjoy celebrating their ethnic heritage. The Yellow is the brilliant yellow of the Brazilian flag.

Now what is really going on up there in Marin? Are nimby control freaks just working out their issues? Do some people have deep-rooted fears of the color yellow? The sort of things that might be best discussed on a therapist’s couch. Is there an actual zoning violation against bright yellow? Or perhaps, is something more sinister going on? I don’t know the people personally who are opposed to the color yellow, but I can see how one could assume, from their remarks, that they might have an issue. An issue with people that look and sound different than them. I can’t say for sure, but it is troubling. One of the critics was quoted in the Marin Journal using the term “urban squalor.” That sounds like a code word for….
Posted by Tofu at 8:10 PM