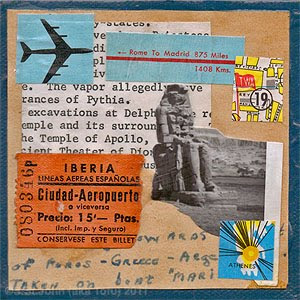 I never met the Carr Family, but I do know that 50 years ago they took a month long trip around the Mediterranean. In 1996 I bought a large scrapbook/album at a yard sale on Page Street that documented their adventure. It made me sad to see the album so casually discarded. It was clearly a labor of love. I took it as a mission to rescue it for $10. The album had already been cannibalized. Every personal photo had been removed, only the hand written captions remained giving me a clue to what was missing.

The album did have the carefully typed and detailed itinerary created by a travel agent. There were maps, boarding passes, ticket stubs from tours, museums and nightclubs. Menus, matchbooks, hotel stationary, postcards and all sorts of ephemera that I also love to accumulate when I travel.

What I do know is that at the beginning of August 1961, Mr. and Mrs. John F. Carr Jr. their daughter Joyce and son John Carr III set out from Cambridge, Mass. for Madrid, then to Rome, Greece, Israel and Jordan. The return had them visiting Egypt and then Lisbon before returning to the U.S. All this accomplished in a little over a month. As all the family photos were removed, I have no idea what they looked like. It’s clear from the hand written captions that the son John put the album together. Over the years it has been a great source of material in my own mixed media work and it gets remembered again in my piece for today.
Posted by Tofu at 12:13 PM